Scandinavia is widely considered one of the safest places to travel in Europe, particularly for visitors who choose to travel with their own vehicle. Most of the reason for this reputation is due to a high standard of driving, but then the road quality is also superb throughout. That being said, conditions change dramatically during winter when heavy snow results in widespread road closure, so the best time to take a road trip in Scandinavia is during the summer or the shoulder season, which is the month of September and early June.

Throughout Scandinavia, drivers are required to keep to the right-hand side of the road and hence, overtake on the left when safe to do so. In some countries such as Sweden, it is also compulsory to drive with lights on at all times without dazzling drivers coming in the opposite direction.

Although driving conditions are similar throughout Scandinavia, there are some differences between countries. In Norway, it is recommended to take your time while driving due to the very steep nature of some roads in which case drivers are advised to stay in a low gear and go steady on your brakes. In some instances, you may even find yourself the road is only wide enough for one car and drivers moving downhill will always have priority over cars coming in the opposite direction. Another example of such differences can be seen in Iceland, where gravel makes up for the most of the road network, and a four-wheel drive is recommended to navigate them.

However, the rules of the road will change from one country to the next, and it is always best to refer directly to the legislation in each destination before taking a road trip in Scandinavia.

Scratching the surface of natural beauty 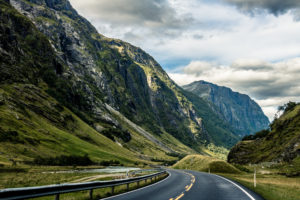 While Denmark and Finland are undoubtedly interesting places to take a road trip, Sweden and Norway are much more scenic with Iceland being in another world entirely. Standing more than seven hundred meters above the valley, Trolltunga is a famous cliff in Norway which is often the front page of travel magazines all over the world. Inspiring in every way, this is just one of the many spectacular outdoor destinations across the country, and similarly, you can find some truly stunning scenery in Tyresta or Store Mosse National Park in neighboring Norway.

However, Iceland is home to the most sensational scenery in Scandinavia and in spite of the large crowds who come to see humpback whales and orcas, the island is most popular for taking a road trip. Encompassing the island, an enormous ring road travels all around the country with many points in which to stopover along the way. From relaxing waters in the Blue Lagoon and hiking trails in Landmannalauger to the volcanoes in Dettifoss and possibly the most stunning waterfall on the planet, Gullfoss. Indeed the scenery is second to none in Scandinavia, and you could spend years traveling these mystical countries without even scratching the surface.

Cuisine in Scandinavia is usually based on ingredients from the ocean. Fish is common and affordable; however, for something a little different, you will often find deer, bear, and even horse on the menu. Scandinavians are also known to enjoy their salt, so you may want to sample some food before deciding to season it.

You should not have much trouble finding a gas station in Scandinavia, it is always best to leave town with a tank of gas, most especially when traveling into an area known for wilderness. Fuel prices do differ between countries, but you should expect to pay between 88 cents and €1.80 per liter ($1.03 – USD 2.12).

Taking a road trip in Scandinavia can be a memorable experience with decent weather and exceptional food, but with a reputation for being one of the safest countries in the world and such a small volume of traffic on the roads, you can also expect a relatively seamless road trip through some of the most magical scenery on the planet.

Travel FAQ is written by travelers for travelers!